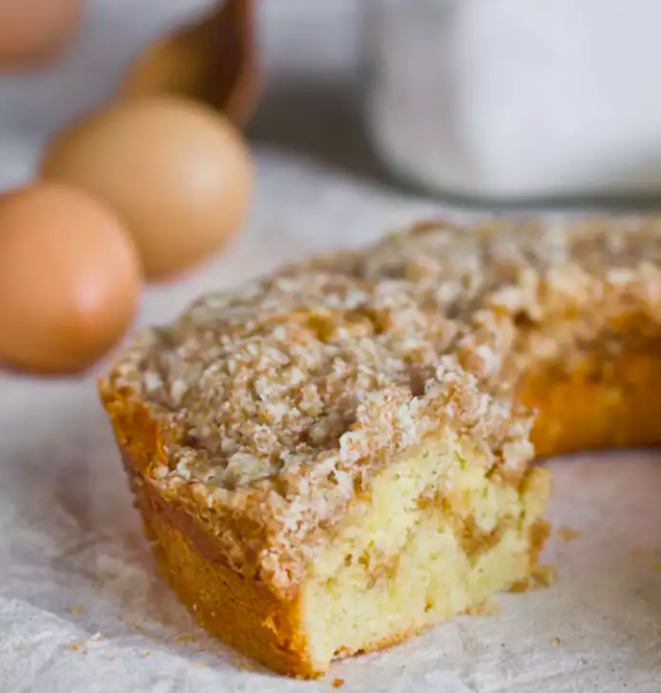 When I think of coffee cake, I don’t necessarily think of “a cake you eat with coffee.” To be honest, when I think of coffee cake I think of Sara Lee. On the particularly hurried fall mornings of my childhood — three sisters scrambling amongst each other to get out the door alive — that frozen red box would emerge proudly from the freezer. What was surely just the ultimate time-saver for for my parents was the edible equivalent of a super bowl ring to us kids. We were having CAKE for breakfast!

When I started cooking seriously a few years back, one of the first recipes I wanted to tackle was that sinful coffee cake from my youth. I blindly searched for recipes until I found a decent-looking version that baked in a cast iron skillet. I’m not going to lie: it was adequate, but it was no Sara Lee.

Fast forward a few years. My culinary knowledge has grown ten-fold, and now it is much easier for me to break down and reinvent all those nostalgic taste-memories locked up in my brain. In fact, recreating recipes has become one of my favorite things to do. With that said, I purchased a Sara Lee coffee cake for old times’ sake and then I got to work. The final result? The butteriest, most delicious streusel coffee cake in all the land. At least in my humble opinion.

Obviously, the ingredient I was missing from my original experiments was yeast. Once I realized the X factor, things got serious fast. My first recipe test was based off the Fluffy Caramel Coffee Cake from The Breakfast Book by Marion Cunningham, my go-to for all things edible before noon. Unfortunately, this coffee cake just didn’t do it for me. The texture was rather dry and the flavor was a little too “flat” for my taste. What I really wanted was a tender, cake-like crumb and *lots* of buttery flavor. I mean, is that too much for a girl to ask?

After a full day of research — which involves me, the “mad scientist,” sitting on the floor wading through piles of cookbooks and magazines — I formulated a piece-meal guideline using a mash up of techniques from the wise ones that have come before me. It was the almighty Bakewise, written by cooking guru Shirley O. Corriher, that nudged me in the right direction. What it seemed I was looking for was a brioche (meaning lots of eggs and butter) rather than the traditional European coffee cake doughs I’d initially set off to create. And then the testing began…

After eating more coffee cakes than I would like to admit, I am proud to share this tasty gem. It might even give Sara Lee a run for her money. Two final things: this recipe does contain a fair amount of butter (cough, cough). Even I’m willing to admit this is a once or twice-per-year kind of treat. But seriously, sometimes you’ve just go to go for it. You could probably, if you really really wanted to, reduce the butter in the dough to 1 or 1-1/2 sticks. The results would be a lighter, if no-less-delicious cake. Also, please just spring for the expensive butter here. I tested with Land O’ Lakes (which is a great all-purpose butter) but the difference when I used Kerrygold was mind-blowing. It truly took the cake from good to great.

Okay, now that I’ve said my piece, I’m off to enjoy a warm slice of my prize and a piping hot cup of coffee. Hopefully it will hold me until next year.

For the streusel topping: